As I leave Zion Park this morning I see a cavalcade of vintage cars driving through the town of Springdale, Utah, the port of entry, so to speak, for Zion Park. I’m in the Café Soleil, having breakfast as they go by, with my computer set up, busy with an article, and I’ve left my camera in the car.  I content myself with watching the cars go by. I suspect they’ll join the people I met the other day as I left Bryce, perhaps at the Zion Canyon Lodge.

I leave early and drive all the way to the town of St. George, the biggest city in southern Utah and whose name has nothing to do with the Saint George of dragon fame. No, the town was named after a saint (in other words a Mormon) whose name happened to be George. That’s the story they tell here.

I spend a few hours this morning at the visitor’s center of the St. George Mormon temple… 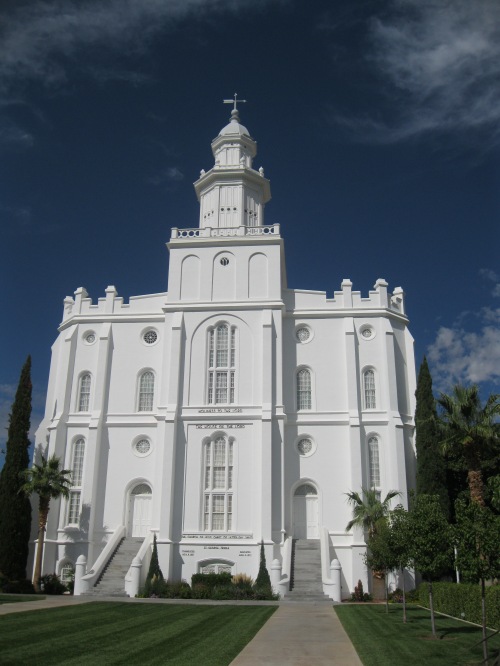 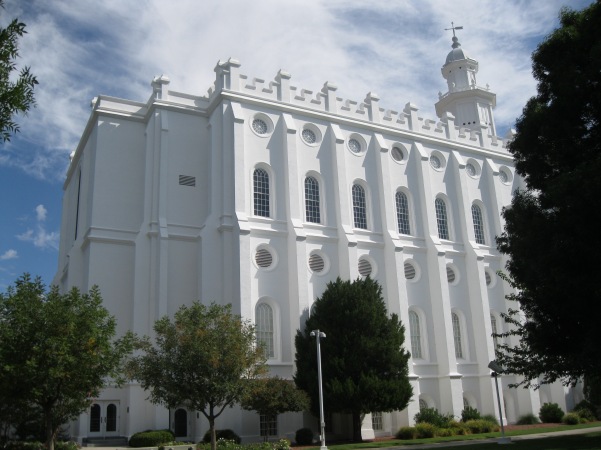 …which is not nearly so photogenic as the Manti temple.

I also drive by the local tabernacle: 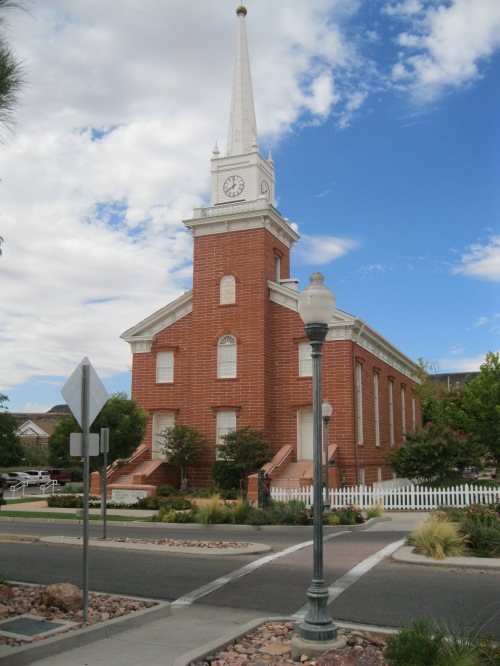 At the visitor center they show me a film and answer a few questions. I really just want to be polite and learn something about what I see as a local institution. I openly tell them that I’m not a potential convert. If you want to learn more about the Church of Jesus Christ of Latter Day Saints you can go here. If you simply google Mormon Church you’ll come upon a vast bank of resources, both sympathetic and antipathetic towards the Church. I maintain my position that the Mormon migration to Utah is a fascinating chapter in United States history.

I return east that afternoon to the town of Hurricane on Highway 59 where I spend the night in a motel in order to have an internet connection and to get some work done.

The next morning I take a few photos from the parking lot: 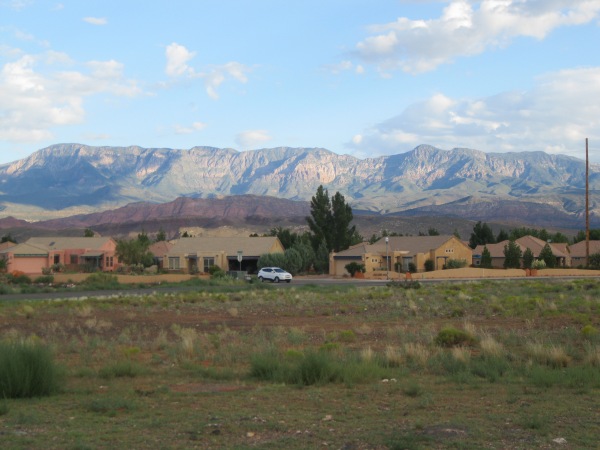 The desert is never far, nor are the mountains.

And then I head east and south towards the Arizona border and the towns of Hildale, Utah and Colorado City, Arizona.  These two towns, formerly known as Short Creek, are the stronghold of the Fundamentalist Church of Jesus Christ of Latter Day Saints (FLDS). The highway passes outside of the two towns. I drive by Hildale, but I turn off the main road and drive around Colorado City for a while.

Since 2006 this community has frequently been in the news for many reasons in relation to the FLDS practices. I won’t go into it here, but the town’s residents are wary of and hostile to outsiders. What I see largely confirms everything I’ve read about these communities. The streets are empty, the few women I see are indeed wearing those pastel prairie dresses and the children run inside. The houses are enormous, some of them apparently unfinished and are often surrounded by high fences or brick walls. There are few shops or offices.

I get a certain sense of forboding, of being watched. Of course, I’ve been noticed. An unknown Dodge Grand Caravan with a flashy yellow mountain bike strapped to its back will not go unnoticed here.

I take no pictures, I don’t need to. You will find many on the internet.  For more information I suggest that you google:

the book Under the Banner of Heaven by Jon Krakauer

the documentary film Banking on Heaven (the trailer is particularly interesting)

You’ll find many photos and resources that merit attention but that need to be studied carefully. You’ll see why, in Utah and Arizona (and in many other communities in the US and Canada too), polygamy is no laughing matter.

And now I want to get out of here.

One thought on “Through Colorado City, Arizona”